Holding On: Their Most Cherished Possession 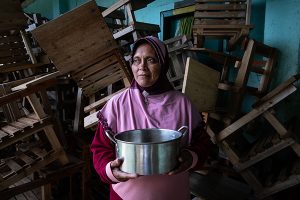 (Podcast) – Around the world, the number of people forced from their homes and neighbourhoods has more than doubled in the past twenty years. The current official estimate of displaced persons is more than 68 million.

In this podcast episode, we ask: What would you hold onto if you were forced to flee your home and had only moments to decide what to take with you?

A landap (a traditional article of clothing), a pot and a government-issued health card are some of the answers from three internally displaced people, who fled Marawi City in the Southern Philippines during intense fighting in 2017. We hear their personal stories as they explain why these items are their most cherished possessions.

These interviews are part of IOM’s global art exhibition and digital campaign, Holding On: Symbols of Displacement.

The post Holding On: Their Most Cherished Possession appeared first on Inter Press Service.