A foreign citizen – well-known journalist, author, university lecturer and regime critic – with residence in the US is abducted by a group of professionals employed by a foreign Government – depicted as a stout US ally – and subsequently tortured and killed. In spite of the case being thoroughly investigated by both the CIA and the FBI, which verified that a crime had been committed, the US Government did not take any steps to rebuke the rulers of the allied country. 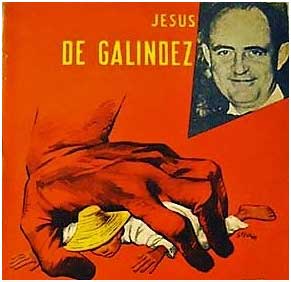 This is not a description of the Khashoggi case. It is another story commencing 10 PM on March 12, 1956, when Jesús de Galíndez Suárez, lecturer at Columbia University, entered the subway station at 57th Street and disappeared forever.

Galíndez, a Basque nationalist who after supporting the Republican side in the Spanish Civil War, had in 1939 fled to the Dominican Republic. Galíndez became legal adviser to the Labour Department and befriended members of the almighty Trujillo family, though Trujillo soon found that Galíndez carried out discrete investigations about his dictatorial rule.

Self-proclaimed five star general and Benefactor of the Fatherland, Rafael Leonidas Trujillo had the Dominican Republic´s capital and highest mountain peak named after him. Trujillo´s power and influence was not exclusively enjoyed by himself, he shared it with his entire family, which controlled almost 60 percent of the fertile land. Trujillo´s bust could be seen everywhere, while every hotel room exhibited a Bible and a Trujillo biography. All published books were dedicated to him, every religious celebration blessed him. All Dominican homes had a plaque declaring: “In this house Trujillo is the boss (El Jefe)”. Trujillo´s influence was not limited to his small island nation. He spent much money to foster goodwill within allied nations.

When Trujillo learned about Galíndez´s inquiries, the Dominican Republic had for 25 years been subdued by his feared secret service, Servicio de Intelligencia Militar (SIM); torturing, jailing and killing opponents, including massacring at least 20,000 immigrants from neighbouring Haiti. Trujillo´s power was maintained by fear, nationalism and racism.

Galíndez fled the country, settled in the US and was going to submit his investigation of Trujillo´s power abuse as a Ph.D. thesis at Columbia University. It was practically finished when Galíndez was abducted by SIM, drugged and in an ambulance brought to a private airfield, where a US pilot and a privately hired plane waited to take him to the Dominican Republic.

Arriving in Ciudad Trujillo, Galíndez was brought to Trujillo´s private residence where El Jefe received his victim, dressed in riding habit and with a whip in his hand. He lashed Galíndez shouting: “Pendejo! Pendejo!” Asshole/idiot. Then he stuffed Galíndez´s mouth with pages from his thesis. “Eat it!” shouted Trujillo before delivering Galíndez to his executioners. Rumours have it that Galíndez was either boiled to death in a cauldron at a sugar plantation or, like many others of the Regime´s victims, was fed to sharks in the sea by Ciudad Trujillo´s biggest slaughterhouse.

In the US, concerns about Galíndez´s fate were raised by the press, but the interest soon died down. However, when Gerald Murphy, the US pilot who had brought Galíndez to the Dominican Republic, where he later settled, proved to be too outspoken and was murdered by SIM, members of the US Congress demanded further investigations of the case. When it was proved that the Trujillo regime had ordered both murders, severe US sanctions were demanded. Trujillo countered these threats by having Murphy´s friend, the hot-blooded Captain Octavio de la Maza, accused of killing Murphy after being subjected to homosexual advances. de la Maza denied all accusations and was as a result found hanged in his cell. Authorities claimed it was suicide. Protests from the US Government forced Trujillo to allow an FBI investigation, which found that de la Maza´s and Murphy´s deaths were a cover-up for the Regime´s murder of Galíndez.

The Galíndez affair resulted in dual disgrace. First, Galíndez´s disclosure of the abuses of the Trujillo regime proved to be accurate. Furthermore, the murder of de la Maza caused a schism within the Trujillo family, since the victim had been a good friend of Trujillo´s oldest son and chosen heir, Ramfis. It was also a disgrace for the US Government, which in spite of vociferous opposition refused to condemn a regime considered to be an important ally in the struggle against Communism. A nation where influential politicians had made investments and which dictator spent vast amounts on public relations, bribes to US policy makers and made generous contributions to electoral campaigns of US presidential candidates.

Similarities with the Khashoggi murder might serve as a reminder that a blatant attack on free speech may prove to be fatal. During his long reign of terror, Trujillo had planned and ordered several murders, though with his wealth and PR machinery he had been able to smoothen international criticism. The ruthless killing of a regime critic, its cover-up and the reluctance of a powerful ally, like the US, to acknowledge a horrendous crime, ignore evidence from its own intelligence agencies, siding with a dictator to protect national interests, resulted not only in the loss of the dictator´s credibility, but also in an erosion of the US´s moral stance in the Western hemisphere.

The post Ignoring the Murder of a Journalist in the Name of National Interest appeared first on Inter Press Service.