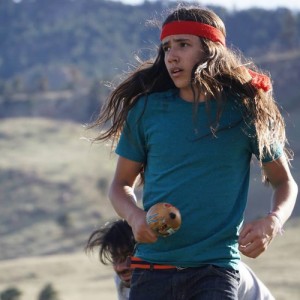 Xiuhtezcatl Martinez is 15-year-old American change agent, environmental activist, public speaker, eco hip-hop artist, and the Youth Director of Earth Guardians– Xiuhtezcatl is a powerful voice on the front lines of the youth-led climate movement.
He performs internationally at music festivals, organizes demonstrations, and has spoken at over 100 high-impact rallies, events and conferences around the globe. He and his brother, Itzcuauhtli, regularly give school presentations to ignite and inspire youth to step up as leaders and take action on behalf of the planet
In 2013, Xiuhtezcatl received the 2013 United States Community Service Award from President Obama, and was the youngest of 24 national change-makers chosen to serve on the President’s youth council.As long as he can remember, Xiuhtezcatl has been connected to the natural world – the mountains, forests, and rivers of Colorado. He was raised in the Aztec tradition in which his father taught him that as Indigenous people they are descendants of the land – activists before that word even existed. As he began to learn about the global crisis, he took action. Xiuhtezcatl has been on the frontlines of climate activism since he was six years old. He has worked throughout his childhood to get them to wake up and take action. He has worked with community leaders in Boulder and has collaborated with over 50 environmental organizations to eliminate pesticides from Boulder’s parks, achieve a fee for plastic bags, regulate coal ash, and achieve a moratorium on fracking in Boulder County. Along with other youth, he is currently working on a statewide ban on fracking through a lawsuit he filed against the Colorado Oil and Gas Conservation Commission.
Due to Xiuhtezcatl’s work, Earth Guardians has grown with over 100 crews worldwide, including Bhutan, India, and Brazil. Xiuhtezcatl gives presentations on fracking and climate change in schools and conferences nationally. His work on climate change has led him to become a youth plaintiff against the United States for failing to protect the atmosphere. To support this litigation, Xiuhtezcatl met with representatives from all three branches of government working to garner support and create a climate recovery plan based on NASA scientist James Hansen’s work. Over eighty members of congress, including the Congressional Progressive Caucus, publicly supports the youth delegation. In 2012, Xiuhtezcatl was one of the youngest speakers at the RIO+20 United Nations Summit in Rio de Janeiro, Brazil. He spoke on UN panels and side events, and had the honor of lighting the sacred fire with indigenous elders from Brazil. Xiuhtezcatl addressed leaders from 192 countries at the United Nations General Assembly meeting on climate change in 2015 as well as performing for the UN Youth General Assembly. He is traveling and initiating international Earth Guardian crews around the globe to fulfill the Earth Guardians mission with crews in Africa, India, Australia, New Zealand, Germany, France, Mexico, and Brazil. Xiuhtezcatl is also a piano composer and has recorded his first album, “Journey.” His music was first used in the documentary “Trust Colorado,” which was shown in over 100 cities worldwide and received the 2012 Best Environmental Film Documentary of the Year. He also writes and performs original message-driven rap music to inspire and educate his peers through performances. He wrote and produced the Earth Guardians’ new album, Generation RYSE, and HBO produced a music video of his original song, “Be the Change.”