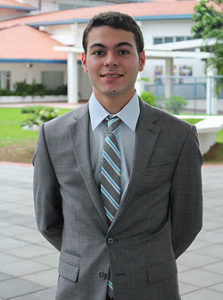 Felipe Félix Méndez is a Panamanian-Uruguayan youth entrepreneur. In December 2015, Felipe founded and has since led the Panamanian Chapter of Redefy, a global youth non-governmental organization that strives to boldly defy stereotypes, as a means to harness tolerance and social justice. He was the keynote speaker for the most recent TEDxYouth@ISP event, where he addressed the importance of youth engagement in global issues in his talk titled “Sentándose en la mesa de los adultos.” A firm believer in dialogue, Felipe has dedicated the past 4 years of his life engaging in thoughtful discussions in the context of Model United Nations, Model Organization of American States, and other forms of debate simulations, participating and organizing about 15 of these and obtaining several distinctions. His belief that giving the youth a seat at the “grown-up” table is the first step towards actually solving issues led him to found the MUN/Debate Team during his first week at ISP, which has provided an opportunity for other students to learn about global issues. Through MUN, he became the first-ever President of the General Assembly of the Panama Model United Nations XXIV, the oldest and largest MUN simulation in Central America. Felipe is excited to motivate the participants to speak up and provide his experience as a tool to build a sustainable future.