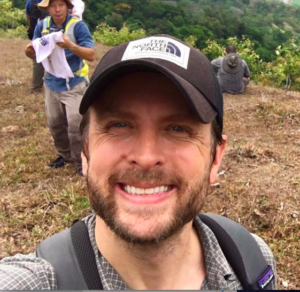 Rob Getman is a Civil Engineer, having received his BS in Civil Engineering with a focus on water resources from the University of Texas at Austin and his PE (Professional Engineers) License from the California Board of Professional Engineers. He is also a LEED Green Associate and a heck of a nice guy. He has worked as an engineer for both Government offices and private firms in several different engineering capacities that are too boring to get into here. He is an American expat that arrived in Panama in 2007 and currently works as a Sales Executive/Project Manager for Telecom Internacional, designing and installing “Special Systems” for new construction, including waste management systems and waste recycling systems for high rise buildings. He is a board member of Caminando Panama, an organization focused on improving the well-being of the rural communities of the country and making Panama a recognized destination for its eco-tourism and sustainable adventure. He is currently spear heading a pilot project proposal to the Ministry of the Environment of Panama that focuses on stopping the flow of solid waste pollution from Panamanian rivers into both the Pacific and Atlantic Oceans.