Escola Americana do Rio de Janeiro was established in 1937  by private individuals, corporations, and the American Chamber of Commerce to afford an academic program that was comparable in excellence to the curriculum found in superior schools in the United States. It opened with 137 students in a small rented house in Ipanema. As enrollments outgrew the existing accommodations it moved to the Bairro of Leblon on a new plot of land that was purchased on Rua General Urquiza. The new school building was officially opened in 1940 with almost 400 students. As enrollment continued to increase a new addition was built in 1945. The “Pink House” was purchased in 1955 and a four-story high school building was constructed in 1960. Leblon was beginning to feel the effects of Rio’s growing population and the school was unable to expand its facilities to meet ever-increasing demands. In 1965, the school began the task of locating a proper site for the school. The present site on Estrada da Gávea was purchased in 1966, and construction began in 1969 when grants from the U.S. Department of State and the Ford Foundation made possible the construction of a modern new facility. The present school opened in July 1971. 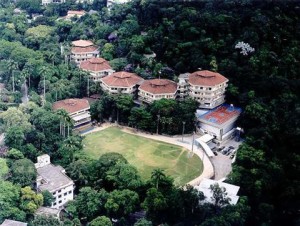 The 12-acre campus is located in the neighborhood of Gávea at the edge of Tijuca National Forest on a steep hill overlooking Rio. The view from EARJ encompasses the city, the inland lagoon, Guanabara Bay, the Atlantic Ocean, and the city’s most famous landmarks: Sugar Loaf Mountain and the Christ the Redeemer Statue. The tropical climate provides lush vegetation and abundant flowering shrubs and trees throughout the grounds. The recently renovated academic facilities are centered in eight towers that house the school’s three divisions. The towers contain 80 classrooms, eight science laboratories, two libraries with a collection of over 45,000 volumes, three gymnasiums, a cafeteria, an infirmary, two snack bars, a student store, and a 350 seat auditorium. More than 250 internet connected microcomputers are used in classroom instruction with 60 in the School’s three computer labs. New science laboratories are designed and equipped to meet the needs of modern scientific exploration and study through the advanced Upper School level. Athletic facilities include outdoor and indoor basketball, volleyball, and soccer courts, a track, and a playing field for soccer and softball.

The new EARJ Campus in Barra was inaugurated on February 20, 2014. The beautiful building is a far cry from the renovated house/school in Jardim Oceânico that opened in 2006 with an initial preschool enrollment of five students, two  teachers and our Barra secretary. 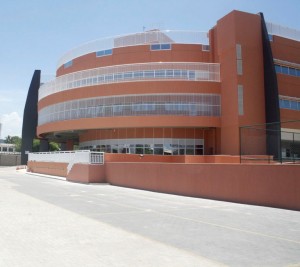 In August 2014, the Barra Campus will offer preschool through 6th grade classes and a new Middle School grade will be added every year.  Students, teachers and parents are still exploring the beautiful classrooms; central, naturally-lit gym and common area and labs and computer rooms.

Our EARJ-Macaé Lower School campus was inaugurated in February, 2009 in a renovated house located in the beach neighborhood Vivendas da Lagoa, Macaé.  At the time, thirty-five students were enrolled and we have steadily grown since.  Presently, our campus is comprised of over eighty students, from preschool to fifth grade and a sixth grade class for August, 2011.  Due to our growing enrollment, we have expanded to the house next door and have a new separate preschool.

In addition to preparing students for success in colleges and universities worldwide, Escola Americana seeks to provide a pleasant learning environment, staffed with qualified faculty and equipped with modern facilities and teaching tools. The study of the Portuguese language and the history and culture of Brazil is central to the core curriculum, as the School encourages its students to benefit from its location in one of the world’s most cosmopolitan cities.

A nonprofit, nondenominational institution, Escola Americana is guided by a Board of Directors. It is accredited by the Southern Association of Colleges and Schools and the State Board of Education in Rio de Janeiro and holds membership in the Association of American Schools in Brazil, Association of American Schools in South America, the European Council of International Schools, and The College Board. The school is also affiliated with the International Baccalaureate Organization.