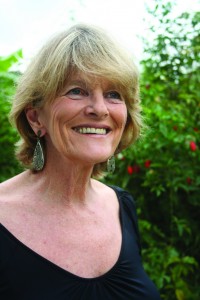 Binka Le Breton is the president of the Iracambi Rainforest Center, an NGO that acts as a forum for the discussion and practice of sustainability. In addition, she is an author of seven books; these works explore topics such as human rights abuses and pressing environmental issues.

However, Binka’s current absorption with such issues has not always been her point of focus; indeed, when she was in her late teens and early twenties, she had been solely occupied with her goal of being a concert pianist. She succeeded in this ambition, despite the considerable obstacles that had been set in her path, including hours upon hours of practice and contracting tuberculosis during university.

Binka soon began performing in cities such as London, Paris and Vienna. Then, in 1964, she met her husband, Robin, who worked for the World Bank. They married and had two children, moving to various countries due to his job; and although Binka continued to perform during this time, she also became increasingly interested in sustainability. When the family moved to Recife, Brazil in 1984, a city that had a highly limited demand for classic concert pianists, Binka stopped playing professionally and became fully engaged with this issue, writing several books on the topic.

Her interest in the environment only grew from that point, and when both of her children left home for university, Binka and her husband decided to truly throw themselves into the idea of sustainability. The two bought a plot of land in Minas Gerais, and used it as a base to see if sustainability was truly feasible. They constructed a house on their new plot and began to alter aspects of their lifestyle in the hopes that they could live without damaging the rainforest that surrounded them. The Le Bretons also welcomed individuals from a variety of backgrounds and professions to meet at their home to discuss and brainstorm new solutions to the environmental problems facing the world today. As these activities and experiments progressed, the identity and purpose of the Iracambi Rainforest Center emerged. With the aim of “saving forests, changing lives”, this award-winning NGO, and its president, continues to push for discussion, brainstorming and hands-on experimentation with sustainability.

However, Binka’s interests are not limited to the environment alone; after living in countries such as Kenya, Indonesia and India, she has become increasingly aware of the human rights issues that face the world today. This awareness and concern is evident, among other things, in her efforts to improve the socio-economic circumstances of the people living in her local area of Minas Gerais, and to investigate and write on humanitarian issues such as the Colombian disappearances and modern slavery.

Binka, however, does not see these two issues of human rights and sustainability as separate entities; she believes that one cannot separate the environment from people, and that the solutions and problems that face one will frequently affect the other.

These experiences and view on GIN-pertinent issues such as environmental and human rights conflicts, alongside he fascinating life story, undoubtedly make her a captivating speaker.